Sanskrit is an ancient language of India.  Commonly the poems and scriptures of India are written in the sanskrit and the mantras can be chanted during meditation.  Ahimsa is a sanskrit word meaning “non- injury”.  Not just in the literal and physical sense of causing no harm, but also in the figurative sense.  Unreasonable dislike is a figurative aspect of this hymn, as well as an unreasonable prejudice toward another being.  Ahimsa represents the true strength at the core of an individual because that’s what it takes to have an open mind and a lack of preconceived notions when approaching another being.  This divine essence of Ahimsa itself illustrates that hate dissolves in the company of love.  It is essentially pure and true love toward life and its’ beings.

Using the power of love derived from Ahimsa points beings in the direction of freedom.  Once hate melts away, evil forces that bog an individual down, join hate in its’ disappearance.  The sanskrit Lokah Samastah Sukhino Bhavantu, also supports the prevail of love over hate.  This sanskrit translates as this; May all beings everywhere be happy and free.  A more in depth translation can be as follows;

Lokah:  The location of all universes existing at this moment
Samastah: All beings living in this location
Sukhino: In happiness, joy and free from all suffering
Bhav: The divine mood or state of union
Antu: May it be so 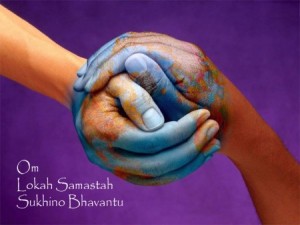 This sanskrit is not a traditional veda sakhas, however it expresses the universal spirit found within all beings.  Most commonly chanted near the closing of a meditation or a practice, Lokah Samastah Sukhino Bhavantu is absorbed into one’s soul to be carried onward into their life.

No Comments Yet - Add yours! +